A lengthy and detailed analysis of changing from a manufacturer supplied drill point to Bourgault Tillage Tools’ Versatile Opener System (VOS) has enabled one Essex Farmer to use his 6m Horsch Sprinter drill in a wide variety of situations across a range of varying soil types.

James Mayes of Sentry Limited, who manages Bentfield Bury Farms at Stansted Mount Fitchet, first looked to convert his drill in the autumn of 2015.  The business was already practicing minimum tillage techniques but felt that the drill was working too aggressively in the drilling of cereals and was encouraging the germination of grassweed seeds. Second to this were pressures associated with the establishment of oilseed rape where a move to direct drilling was being considered to counter against the risks of Cabbage Stem Flea Beetle and a need to retain moisture at the critical time of drilling. As James says, “We had been min-tilling OSR ground and found that producing satisfactory seedbeds that would allow for the timely and reliable establishment of the crop without them drying out and losing moisture was becoming more and more difficult to achieve”.  Indeed, a failure to establish a strong enough crop in August 2016 prompted a radical rethink on how the business’s crop should be established.

Upon walking a cereal stubble one day James considered whether or not a crop could be drilled between the rows of the previous crops stubble, an afternoon finely adjusting GPS equipment proved that this could be successfully done and a move was made to begin direct drilling of the 2017 crop.  Three further crops have now been established in the subsequent years with the technique being expanded into cover crops and cereals following beans and oilseed rape.

“I had looked at a number of competing drill coulters but was always drawn back to the level of low disturbance of the VOS”, explains James.  “We spent a few hours with Stuart from Martin Lishman Ltd, discussing how the coulter would work and the types of soil conditions we would expect to be working in, and finally concluded the VOS would suit our needs”.

“In Stuart’s sales pitch he did remark that he felt we could possibly achieve an output of 5,000 acres from the points, such is their high level of resistance to wear. We have to date achieved an acreage of 4,655 and have the confidence to believe we will successfully break the 5,000 acre barrier.”

The coulters have been used in a variety of situations and soil types that range from heavy clay to sandy clay loams containing stone and gravel, these soils being traditionally harder wearing on the business’s soil engaging machinery.

James explains that “in 3,897 acres of direct and minimum tillage drilling we have effectively split our two main systems 50:50, the remainder of our work has been done within a plough-based system”.

“Our aim is to now assess how far beyond 5,000 acres we can go, continuing with our current set of coulters before renewing the set”.

Have you done your pre-harvest checks? 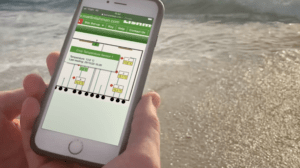 The Economics of Damage and Bruising Prevention

Keep up to date about future news, events and products from Martin Lishman.